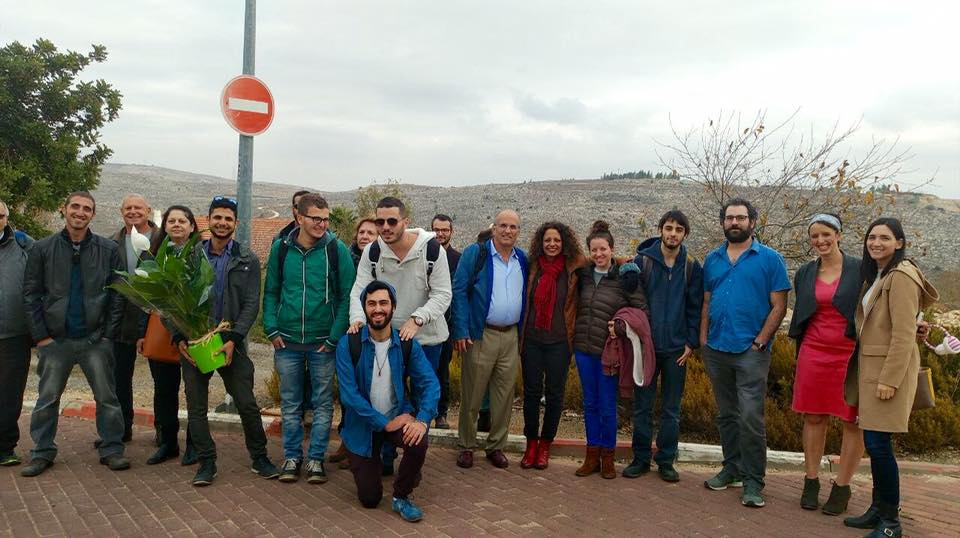 A Shared Responsibility—Thoughts from a Visit to Ofra

“Three hours ago, I returned from Ofra. I spent time at the home of Esther and Nezach Brodt, who hosted activists from Darkenu. Theirs is one of nine houses in the settlement that received demolition orders. They are young—my age—and kind hearted. They have big smiles. They are good people; they listen to the opinions of others and are eager to engage in meaningful conversations. Esther is an architect and Nezach is a lawyer. They have two sweet little girls—the oldest one lost a tooth today!—and a small baby. They wanted to live near their parents. If there was no Ofra, and the cost of living wasn’t so out of control, I expect they would be living somewhere in the greater Tel Aviv or Jerusalem areas.

Our meeting was really special, because it offered something increasingly rare in our national landscape. We weren’t trying to best a political opponent or win an argument. We weren’t trying to convince the other to believe our ‘correct’ opinion. Instead, we were there as fellow human beings. We are not used to listening. It’s become habit to scroll through the same social media feeds, to look at the same faces, to listen to the same ideas. We forget to look critically at the realities within which we live; we forget to question the people who form them. Today, we had the opportunity to leave our familiar and comfortable surroundings. Esther and Nezach invited friends and neighbors, people from Ofra and Amona, to come and offer us their own individual stories—each sharing his/her world view.

Iris Hayisraeli, mother of Yehuda Hayisraeli who was badly injured in the head during Operation Protective Edge (Zuk Eitan), told us about how she raised over a million shekels to finance an extension to her home in order to accommodate her son as he recovers from his injury. She talked about the gap she feels between the political and the human dimension of her story, the pain and disappointment she felt when the Defense Ministry, citing ‘legal issues,’ refused to help her financially. She did note positively that Yariv Oppenheimer said that such matters like this, human matters, should not be opposed. My heart aches for her.

Two of the residents from Amona left me particularly saddened, each for her own reasons. Yifat Erlich, a publicist and a radio broadcaster on ‘Galei Yisrael,’ said she is willing to give up on the Zionist idea of a Jewish sovereign State if only she could stay living in Amona. From her uncompromising position, a democratic Jewish national State, in which Jews are the majority and Jews decide the future of the land, is racist. She couches her right to the land in the language of human rights, arguing that she is, in her words, a ‘native.’ The second representative from Amona cried bitterly, and said she simply cannot understand how she can be turned out of her house. She described her distrust in the Supreme Court and the Israeli political system in general.

Yaki Fried, a resident of Ofra and an activist in the Eretz Shalom movement, spoke of the need for co-existence with our Palestinian neighbors, and about his lack of faith in the possibility of separating from them. He reminded me of the type of people who supported the notion of the ‘two states, one homeland’, people with whom I also disagree. Fried’s wife talked about her lack of trust in the security strategy of the left. Nir Yehuda, a principal at a school that prepares religious girls for entry to the army, asked why he’s lumped in with all the other ‘settlers’ rather than being seen and treated as an individual.

There is a lot I could say about all the issues raised, but we came to listen, not to judge. I think—and today’s meeting really reinforced this belief—that we are on the brink of something. We’re experiencing this moment of grace, in which it’s possible to question basic assumptions and reshape our reality. We need to organize a new Zionist vision, to start a meaningful dialogue and ask ourselves how we can maintain a Jewish state with democracy and equality for all its citizens. We have to imagine what such a state will look like, and we have to begin to build it. We have to vow not to turn away from one another, no matter how deep our disagreements run. We cannot forget our fundamental human values, most especially to ‘love thy neighbor as thyself.’

Since 1967, we have been failed by politicians who, looking at a map of this land, have offered no decisions, just fevered and fantastical possibilities. It’s all political theater, games, empty policy of a state without a vision for its future. I don’t care who established Ofra, or who approved Amona. I care that it is people like Esther and Nezach who have to pay the price. One day, we will all be forced to taste the bitter fruit of failed government policies beyond the Green Line, our entire nation. I am not afraid of another disengagement, another evacuation of people—there is no question that we must give up parts of the land. What terrifies me is the lack of compassion, and the way our society forgets that first and foremost, we are all human beings. There will come a day when hundreds of thousands of settlers will need to find a new place to live, and each Israeli citizen will have a moral obligation to stand with them and help them find a place in which they will be comfortable, in which they can pursue a life of meaning.

The evacuation of Amona and the nine houses in Ofra will be the test of our willingness to stand by one another. Not as a winner supporting a loser, but as a friend supporting another in need.

The Place Where We Are Right / Yehuda Amichai

From the place where we are right

The place where we are right

Is hard and trampled

But doubts and loves

Dig up the world

And a whisper will be heard in the place