The Field and Activism Department is Darkenu’s executive arm in the field. The department is in charge of implementing ideas and projects, together with Darkenu activists on the ground, and mobilizing citizens to act on current burning issues in the country.

In 2020, we started a campaign to boost voter turnout. Over 4,250 volunteers participated, encouraging voting in their neighborhood, while another 120 people helped grow the campaign by making thousands of phone calls and organizing activities in the streets.

In June, as the government began promoting unilateral annexation of the Jordan Valley, we did not keep quiet and launched a campaign against annexation, in which our activists met with Knesset members outside their homes weekly and expressed to them their concern about such a policy during the pandemic and resulting economic crisis. We also made the moderate majority’s voice heard in Rabin Square, Tel-Aviv, at the large rally against annexation we organized.

Darkenu also acted as a significant force in the protest against corruption from its very beginning. For over 20 weeks, we sent free buses full of demonstrators to Jerusalem’s main protest from dozens of cities around the country and under Darkenu’s field activists’ direction. Our protest displays resonated with many Israelis and drew much media attention.

Some of what we’ve been doing for the past few months:

Our main activism WhatsApp group has 2,538 volunteers, citizens of all ages who are taking part and leading nationwide activities, whether it is digital demonstrations, activism in the field, volunteering in our various departments, or lending a helping hand at DemocraTV’s studio.

We strongly believe in a bottom-up approach and are committed to continuing to implement it as an integral part of our department’s strategy. 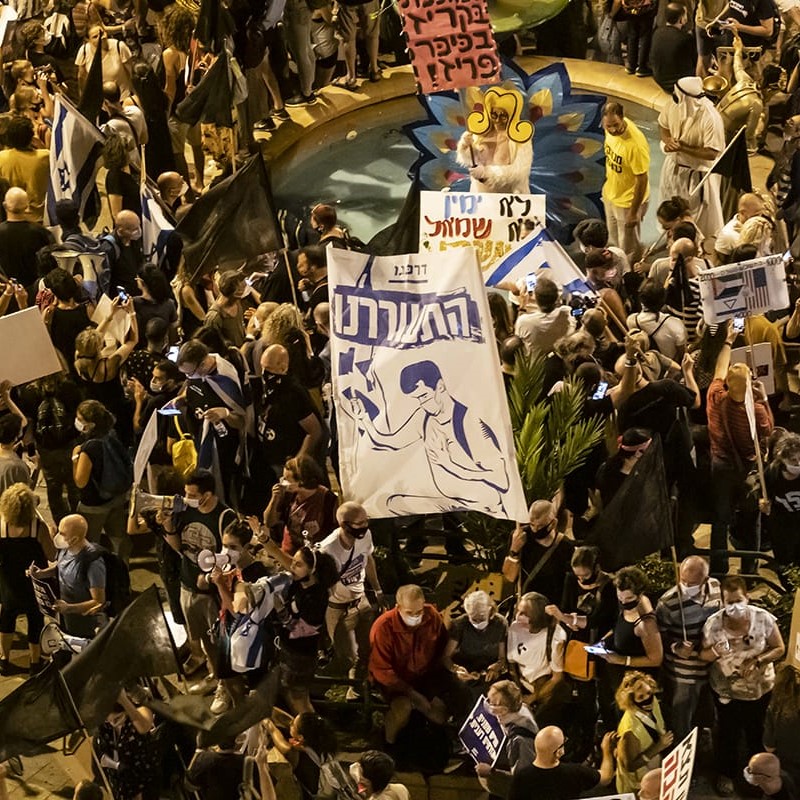 "No to Annexation; Yes to the Economy; Yes to Security" Campaign

Whether it’s a protest in front of the house of Minister Tzachi “Phoney” Hanegbi, every Saturday in Balfour, a mass demonstration against annexation in Rabin Square, a demonstration by social workers and interns. In Holon, in Ness Ziona, in front of the Knesset.
We demonstrate everywhere for equality and justice, for democracy, and against the disconnected government! 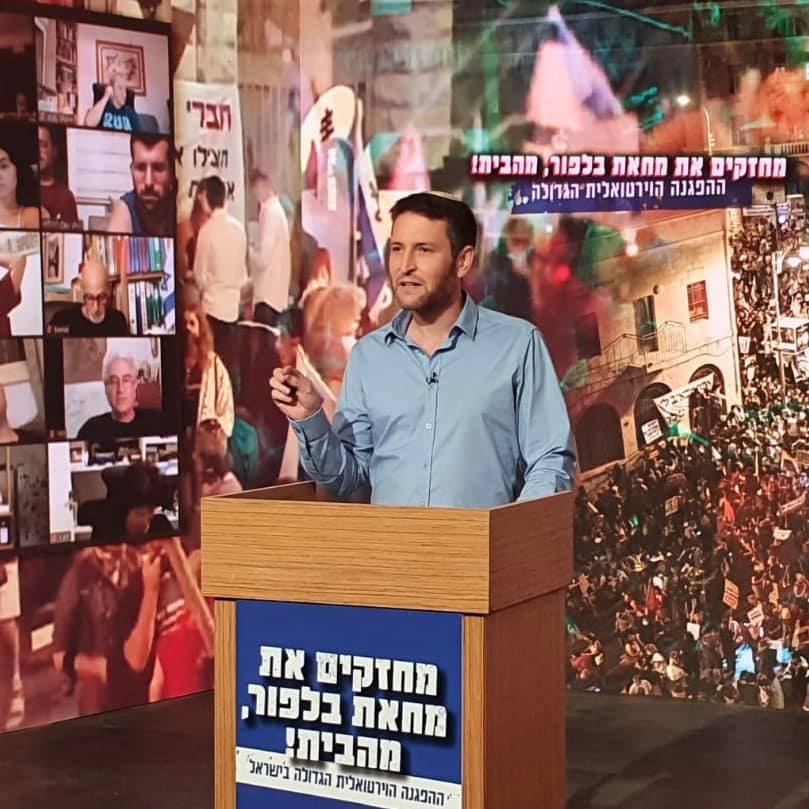 "Fighting for Our Home, From Home:" the World's Largest Virtual Demonstration

During the second lockdown imposed on the country by the Israeli government and following the failure to manage the Covid-19 crisis, we held the largest virtual demonstration in Israel. More than 800,000 Israelis stood together with us to say to the elected officials in a loud and clear voice: You have failed to manage the Covid-19 crisis; set up a state commission of inquiry now! 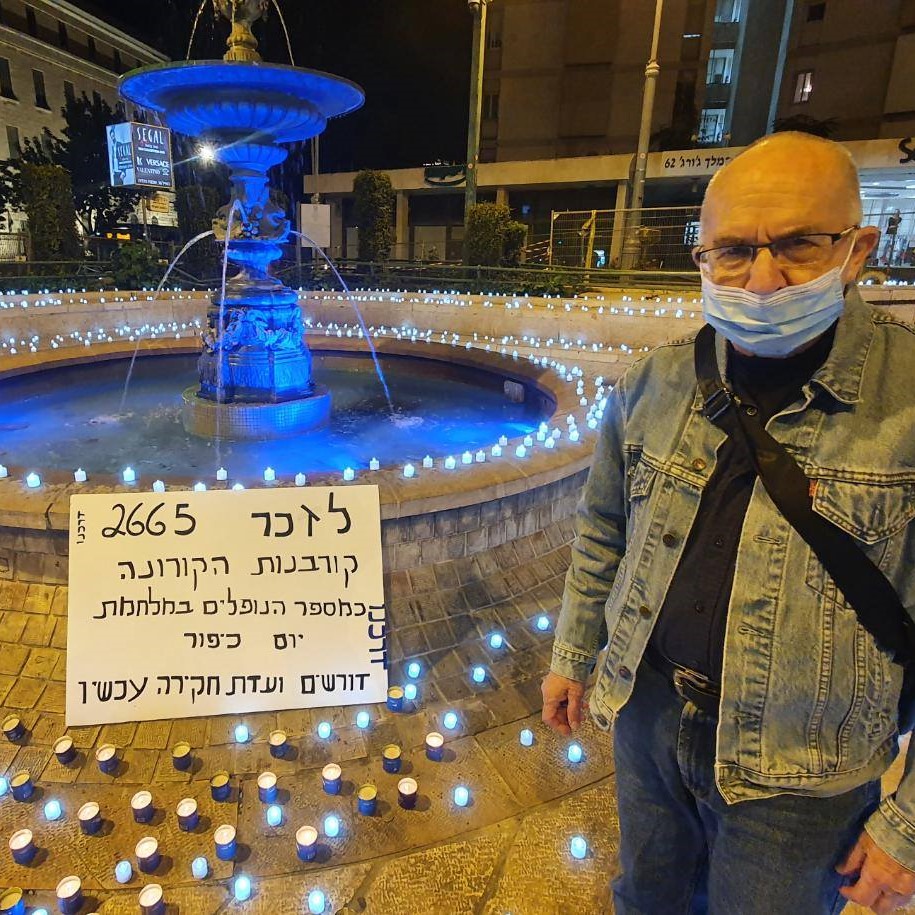 We came to Paris Square, in Jerusalem, to mark the crossing the terrible threshold of 2,665 Coronavirus victims, the same as the number of victims of the Yom Kippur War.
The 2,665th candle was lit by Moti Ashkenazi, who fought as a captain in the war and led the protest against the Israeli government following the Yom Kippur War’s leadership failure: “The Coronavirus crisis is Netanyahu’s Yom Kippur, and we all have a duty to demand a state commission of inquiry now. “ 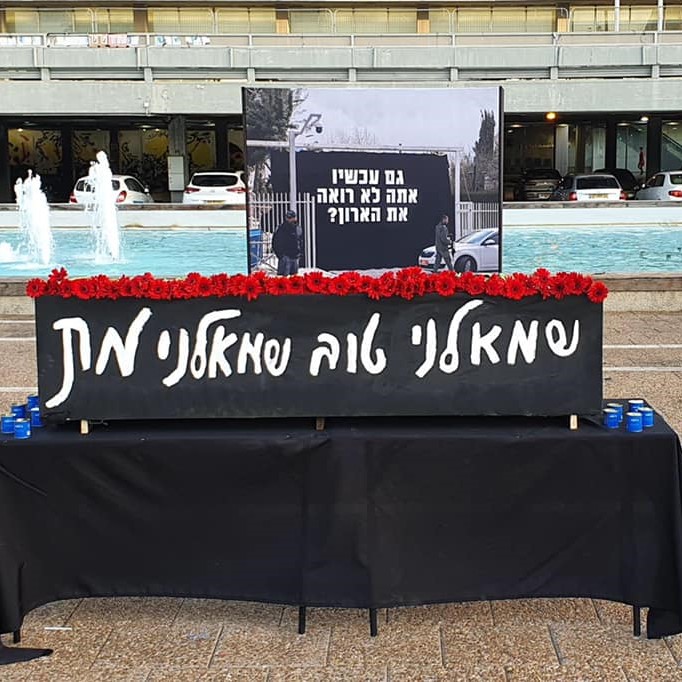 "A Good Leftist is a Dead Leftist" Coffin Display

We debated whether to take off our gloves in the face of the violence raging in the streets against protesters, and this installation is scary and hurts like a punch in the guts.

But when, in a democracy, protesters are violently attacked, when all they’ve done wrong is to go out every night to protest – there are no other choices left.
25 years after the assassination of late Prime Minister Rabin, half a century after we abandoned the public space to violence – we can not let it happen again. 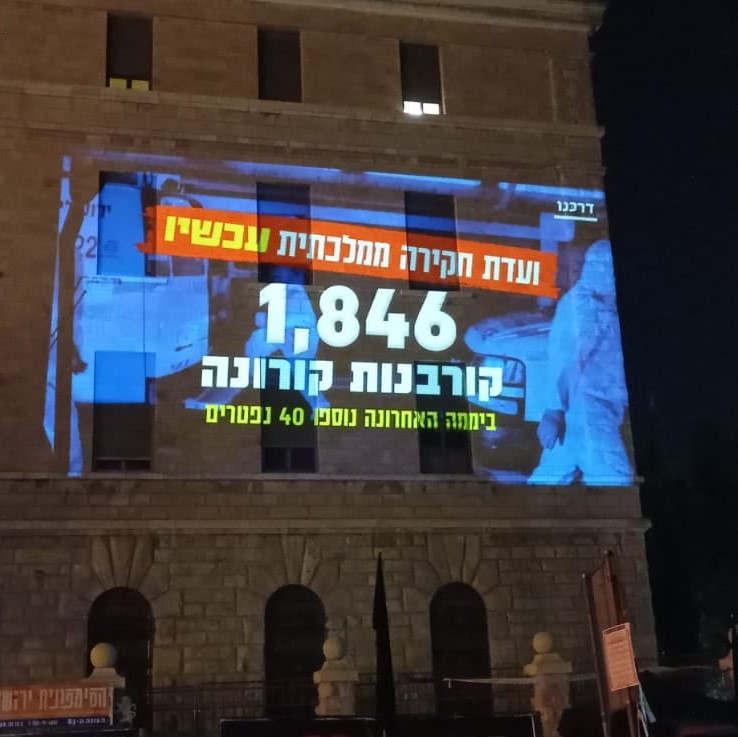 During the Covid-19 Crisis, we screened the number of daily Coronavirus victims on Balfour Street in Jerusalem every evening, demanding the establishment of a state commission of inquiry.

Because, after thousands of deaths, a million unemployed, hundreds of thousands of self-employed seeing their businesses crumble, a quarter of a million confirmed cases, and the worst leadership failure in Israel’s history, the citizens of Israel deserve leadership that cares about the citizens. 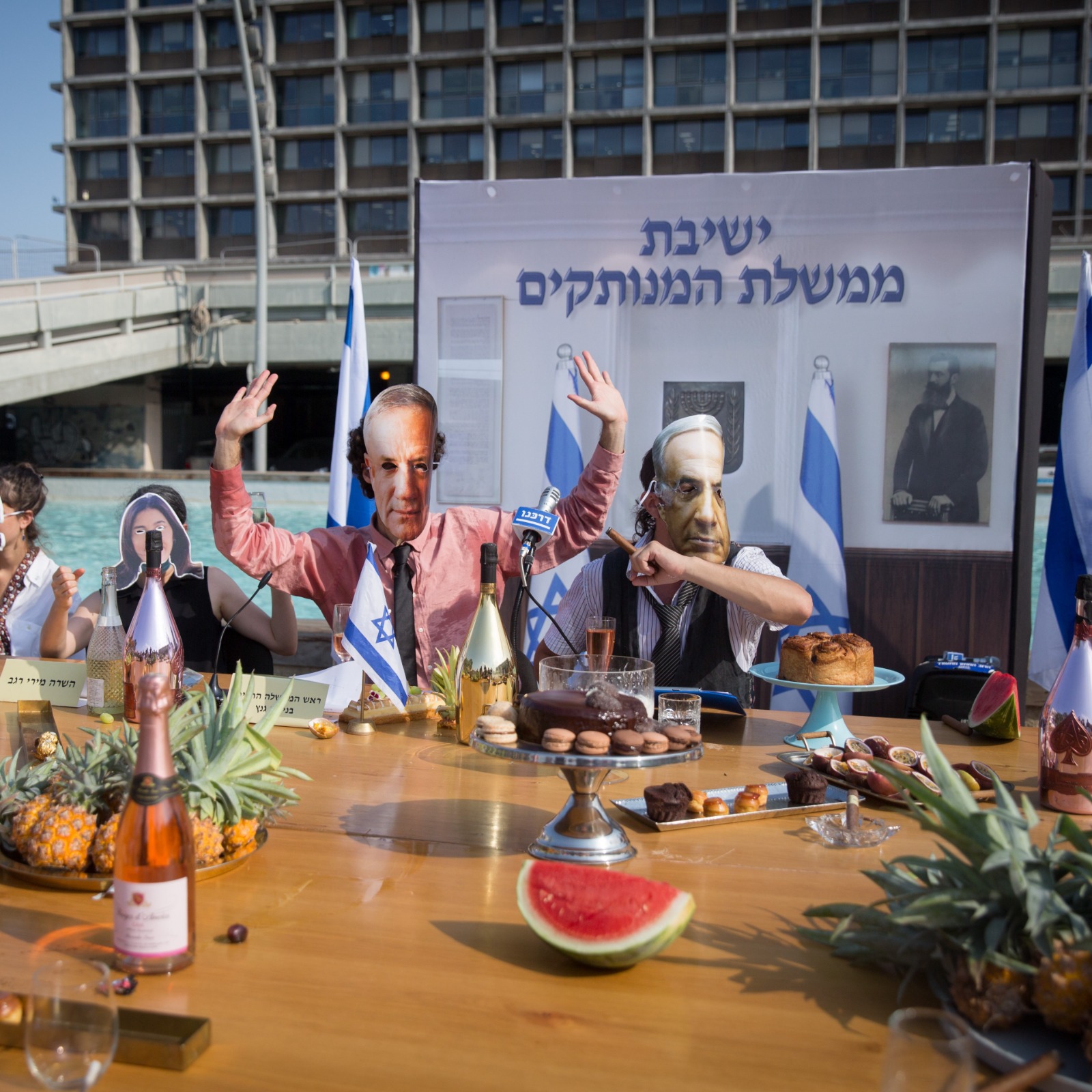 After the cabinet meetings did not convene for over 5 weeks, no budget was passed, and the state was not appropriately governed during the biggest crisis it faced; We placed a display of the detached government at the center of Rabin Square in Tel Aviv. 40 Darkenu activists impersonated our inflated and detached government ministers and conducted the meeting in their place. 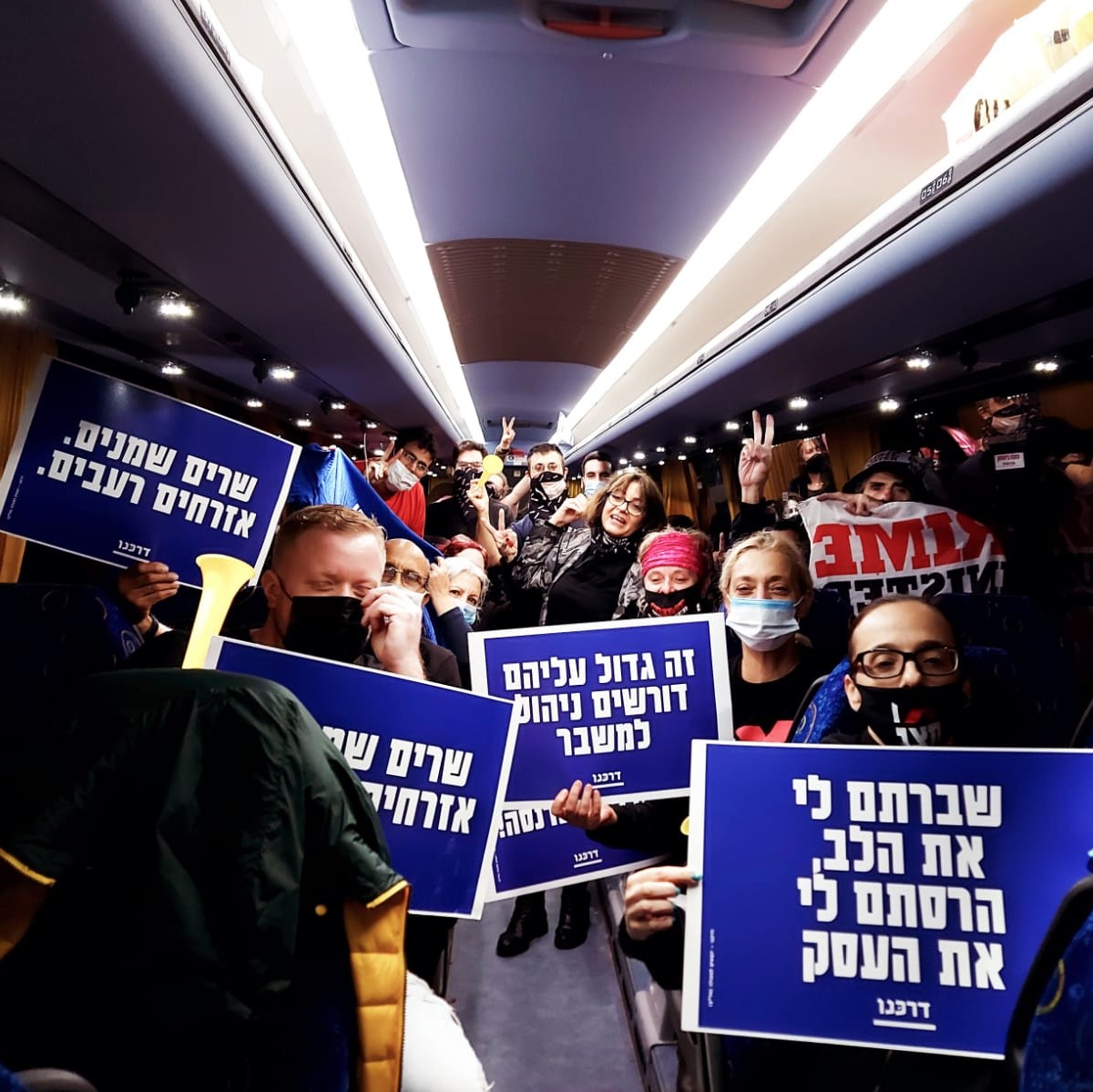 Shuttles and Buses to and from the Balfour Protest

Every Saturday night, hundreds of demonstrators from all over the country, from Eilat to the Galilee, came to demonstrations in Balfour, Jerusalem, with the help of our fully crowdfunded transportation network. This initiative allowed anyone wishing to come to the demonstrations to join and helped strengthen the struggle to safeguard Israeli democracy. 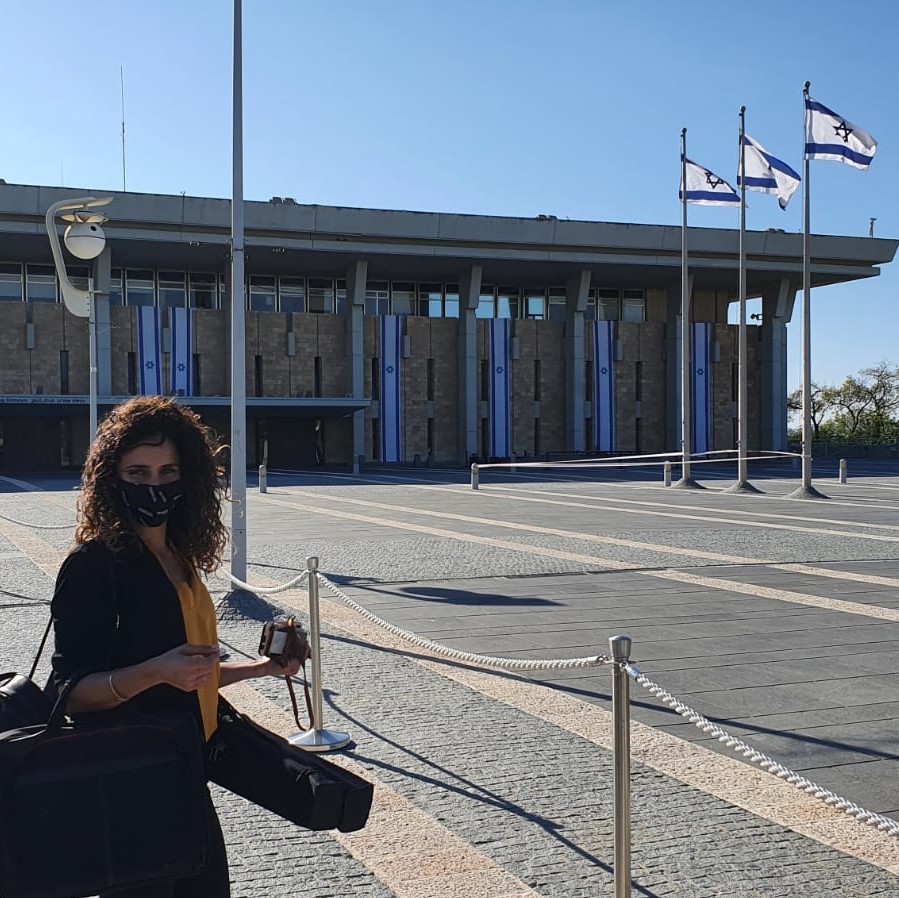 Dozens of students have joined our unique leadership program this year. They operate in the various branches of the movement, acquiring tools and experience through dedicated training in multiple topics relevant to social struggles and policy advancement.